The side shot, modulating design of the Phoenix water heater proves far superior to the down shot, non-modulation design used by the rest of the condensing water heater industry.

Specify the Best
The brand name water heaters are an easy default selection. Break the habit with the higher value choice.

Cost Competitive
The Phoenix can cost 5-10% more than a coated steel condensing water heater because the Phoenix uses more expensive, and durable raw materials. You get what you pay for.

Easy to Service
With all the moving parts easily accessible in the front, Phoenix is a dream to set up and periodically service, like all condensing heaters.

On top of that, the average service life of a traditional water heater is short - as few as 4 years by some estimates. Compare that with the 10 year estimated life expectancy of the HTP Phoenix tank. Put these two facts together, and you can see why 80% water heaters are going the way of the Dodo.

A “Throw Away” mind set. Get over it.
The major manufacturers of water heaters have long been wed to old technologies which are ill-suited for condensing operation. All it takes is one imperfection in the coating of a steel tank, either outside or inside the combustion heat exchanger, and a leak will occur … “sooner” rather than “later” in most cases.

Contrast that with the ultra high efficiency design of the Phoenix Water Heater which is based on a long life span, not planned obsolescence. Heat Transfer Products, America’s leading maker of premium stainless steel tanks for over 25 years and maker of the Phoenix, does it right. The stainless steel/ cupronickel used in the Phoenix lasts longer than coated steel and sacrificial anodes. Period.

Phoenix or Tankless?
The Phoenix has a tank that accommodates recirculation systems easily, is not sensitive to mineral build up on the heat exchanger and can manage peak load demands more cost effectively than a tankless. A 199,000 btu condensing tankless water heater can produce a maximum of 6.5 gpm at 60 degree rise. If the peak load of the project will ever exceed 6.5 gpm one has to employ two tankless water heaters, while one Phoenix tank can manage 10 minutes peak demands often seen in commercial applications. 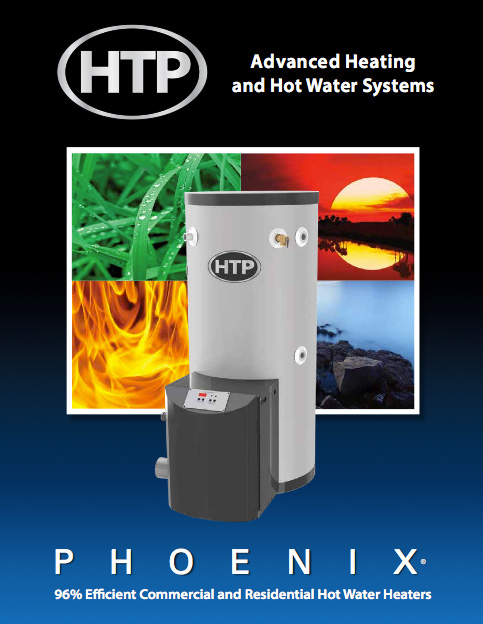